Woodstock Then and Now – A 50th Anniversary Celebration

Woodstock Then and Now is a first-hand transcription of a series of roundtable discussions and interviews with “Woodstock luminaries” held at the Berklee College of Music in April 2019. Here, the words of Michael Lang (Woodstock co-founder), Chip Monck (emcee, lighting and stage designer), Bill Hanley (audio engineer), Henry Diltz and Elliott Landy (photographers), Rona Elliot (public relations), and Gerardo Velez (percussionist for Jimi Hendrix) are presented for scholars and fans alike. Meeting all together for the first time since 1969, these luminaries shared Woodstock stories, talking about the impact of the festival on their careers and society as a whole. 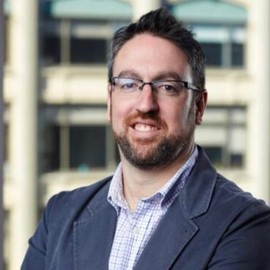 Alex Ludwig is an Assistant Professor of Liberal Arts at Berklee College of Music. I teach music history courses on topics ranging from The Beatles to Viennese Modernism and Film Music. My research interests include Sonata Theory and the role of editing in film musicals. In addition, I have been cataloguing film scores that use the chant melody “Dies Irae.” Check my list and let me know if you’ve found a new one for me.

When I’m not teaching, I’m playing and coaching soccer, or watching hockey, or running after my son, Lucas, or our new dog, Sofi.

Given the current pandemic, all academic conferences have shifted online; some more successfully than others! This year, I was lucky …
Last updated on Nov 10, 2020 1 min read

It’s spooky season and that means my work on the Dies irae in film music has bubbled up on the internet again. I was interviewed …
Last updated on Nov 10, 2020 1 min read

Shazam and the Online Listening Quiz

Here in New England, we get a fair amount of snow. Because of this, I usually build in a few classes that can be taught online. Given …
Last updated on Nov 10, 2020 2 min read

Most of my classes meet once a week, so I tend to start each class with a small, low-stakes warmup quiz. These quizzes serve a few …
Last updated on Mar 4, 2020 2 min read

What I'll Be Blogging About

The use of the “Dies irae” plainchant has a long history in film music and other assorted media.1 Its liturgical text comprises vivid imagery of burning ash, illustrating the final day of judgement, and its modal music fits comfortably within a tonal context, highlighting the lowered third and seventh scale degrees. It is no surprise then that quoting the “Dies irae” chant remains a popular option for composers of film music; in fact, using the “Dies irae” in your film score today usually ellicits the same response of recognition in listeners as does the stock sound effect known as the “Wilhelm Scream.” Prominent examples of this chant appear in nearly every decade of the history of film music, ranging from It’s a Wonderful Life (1946) to Frozen 2 (2019) and The Mandalorian (2020).

For more, see all of my supercuts:

YouTube’s massive platform offers many benefits to the music scholar working in the public sphere. Engaging in such work is easy on YouTube, where an entire sub-genre of “Explainer” videos proliferates on virtually any topic. Music scholars, and especially film music scholars, are poised to excel on YouTube because they can easily substantiate their assertions in real time. In this presentation, I will discuss the background, creation and publication of two different videos.

The Rhythm of Life is a Powerful Beat: Following Fosse's Musical, Physical, and Visual Rhythms

Rhythm is the single thread connecting the many facets of Bob Fosse’s career. As a dancer and choreographer, Fosse focused on shaping the rhythmic properties of his stage shows; as a director, and de facto film editor, Fosse applied this fascination with rhythm in the editing bays. Despite a wide variety of dramatic content, these films are a unique opportunity to explore the role of rhythm in the editing of film musicals. Fosse directed five films in the span of one decade: Sweet Charity (1969); Cabaret (1972); Liza with a Z (1972); Lenny (1974); and All That Jazz (1979). Based on analyses of key scenes from Sweet Charity and All That Jazz, I have found that Fosse manipulates rhythm in three ways: musically (the performed musical score), physically (the staged choreography), and visually (the edited cuts). In this talk, I will examine two sequences that illustrate Fosse’s corresponding layers of rhythm and consider how this complex nexus helps to frame our understanding of film musical’s visual rhythm.

Woodstock Then and Now: A 50th Anniversary Celebration